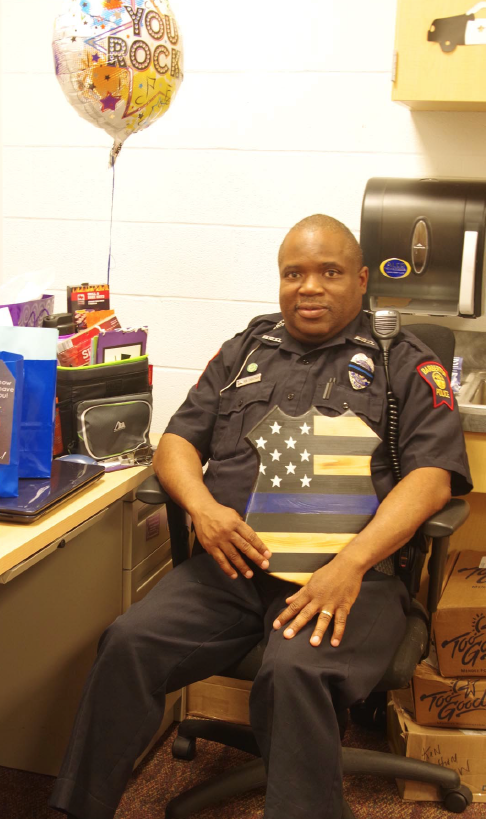 On a Friday afternoon in May, children at Barberton Elementary West lined up for a goodbye hug at the office of school resource officer, Ken Cheatham.

A 28-year veteran of the Barberton police department, Cheatham will be relinquishing his position to a younger officer and returning to a patrol beat for the last year of work before retirement. In reflecting on his departure, he occasionally blinked back tears. “I’m going to miss this.”

Cheatham became an SRO in 1999 at the old Barberton High School, at the behest of the late Michael Kallai, chief of police at the time.

“Chief Kallai said they were starting a new position, and asked me if I wanted to take it,” said Cheatham. “He said, ‘I only ask two things of you: I want you to start the program because we never had it before. And, I want you to make it so they can‘t do without it.’ I had no idea what I was getting into.”

Cheatham spent 17 years as an SRO at the high school, and three at Elementary West. “It’s been a good run,” he said.

In hindsight, he regrets going in without training as an SRO. “Looking back, I wish I hadn’t gone in as a cop. If a kid did something, I arrested them, and it wasn’t needed. So I wasn’t perfect.”

It didn’t take him long to realize there was another way. “I started to take a different approach, and it just opened up doors.”

He listened, educated, counseled. In the areas of crime prevention and safety, he became proactive, instead of reactive.

He explained, “As they came in, just sitting down and finding out why the kids are acting the way they are, most are acting out because they are hurting because they’ve got too much on their plate,” he said.

“I came to the conclusion, ‘Find the hurt, heal the hurt.'”

It’s one of the several slogans Cheatham uses at schools to inspire and educate. Others are, “Hugs, not slugs,” to discourage violence, and “The only thing you should like sugarcoated is your frosty flakes,” to encourage self-honesty.

His most popular saying, however, is directed at young women. “Get your nails done.”

Over his years as an officer, he has seen young women make poor life choices because of low self-esteem and noticed that when they do something for themselves, like doing their nails, it makes them feel better. “I started telling the young ladies at the high school, ‘hey, get your nails done,’ to build self-esteem and it turned out to be a success. Around prom time, they’re all flocking to me to show their nails,” he said with a laugh.

Cheatham and his wife Cynthia have successfully raised daughters Moriah and Alexia, who have gone into law and nursing careers, respectively. “I think I was meant to raise daughters.”

Although he will miss being an SRO officer, Cheatham said, “It’s time. You know when it’s time. Like I said, it’s time for a young person to get in here and have the success that I have and take it to the next level.”

That person will be Officer Greg Stalder, who once came up to him when he was in middle school, and said, ‘Officer Cheatham, I’m going to be a police officer just like you and one day I’m going to have your job,'” said Cheatham with a chuckle.  “I couldn’t be happier for him.”

Cheatham’s last day as an SRO will be the end of the school year, and he will begin day shift parole duty in June. “I only have a year and a half left before I retire, and this will give me the opportunity to work with the guys that I came in with.”

As for Chief Kallai’s original assignment to initiate the SRO program, Cheatham believes he succeeded. “My job was to come in and make it to where they couldn’t do without it, and now we have an officer in every school.”