Norton’s girls basketball team lost a non-conference game at Lake, 44-36, but health may be a bigger concern.

The team was without starter Kaylee Murawski and reserve guard Grace Marino while usual starters Gabriella Destefano and Riley Ballinger came off the bench and played sparingly due to the flu.

That left more pressure on starting guards Bailey Shutsa and Bailey Acord, and they kept Norton in the game against a team that had won four straight coming in. Shutsa led the team with 17 points, eight rebounds, three assists and five steals while Acord had 10 points and one block. Madison Tatka (4 points, two blocks), Destefano (3 points, three rebounds) and Avery Morr (2 points, two steals) also scored.

The team’s record falls to 15-6 and they will finish the regular season Wednesday, Feb. 12 at Woodridge, 7 p.m. With a win the Panthers will complete the season with a perfect Portage Trail Conference record. Norton will then prepare for their first postseason game at home versus Canton South Thursday, Feb. 20, 7 p.m. 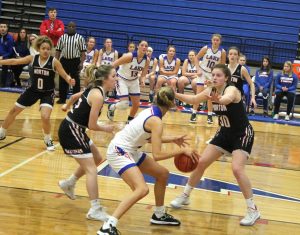