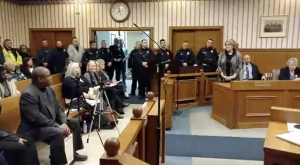 The Finance Committee meeting began with discussion on a late request for legislation. The draft, which would amend an ordinance passed in 2017, clarified non-bargaining classified employees from appointed employees with respect to prior state of Ohio political subdivision employment and vacation time. The ordinance states that unlike appointed employees, non-bargaining (non-union), classified employees with prior service must serve a probationary period of 120 days. At the meeting’s close, Mayor William Judge announced the city budget will be passed by the end of March.

The council chambers were crowded as friends, family members and fellow officers of Officer Kennith Cheatham attended the committee of the whole meeting. Council recognized the retiring officer for his 29 years of dedication to the city as a member of the Barberton Police Department. A Barberton native, Cheatham proudly served in the army from 1984-1987 before becoming a dispatcher for the city. He was hired as a police officer in 1995, and went on to become Barberton’s first School Resource Officer (SRO) in 1999. He served as the high school SRO for 20 years, touching the lives of many students. He was congratulated by many members of council as well as his daughter, who commended him on his service as well as his character. Cheatham’s positive impact on the community was recognized in the official ordinance, which referred to him as “more than just a police officer.”

The city received recognition as well, as the 699 Chapter of the Purple Heart declared Barberton a Purple Heart City. “The City of Barberton honors the service and sacrifice of the men and women who have served at various duty stations around the globe, and have done so with unwavering commitment to protect all that we hold dear,” said the chapter’s Commander of Military Larry Emmery. The designation is given to towns that work to recognize the sacrifice of those who have served their country, and is only held by about 900 cities country-wide. “[I] am very proud to have this honor for the City of Barberton,” said Judge as he thanked the chapter, and added the city will be placing Purple Heart signs at the entrances of the city.

During the Feb. 18 meeting, Judge announced that BWX Technologies has received a $1 billion contract from the Federal Reserve. The funds will impact all of their facilities, including the Barberton location, and Judge says the city will be meeting with the company’s leadership team as the scaling up of their production continues. Amazon has also informed the city that its new facility will offer 3,000 job positions, double the originally expected 1,500. “We want to do everything we can working with Amazon, the county and Jobs Ohio to get Barberton residents employed there,” says Judge. Join the Herald every Monday for a Facebook live stream of the council meeting at 7 p.m. 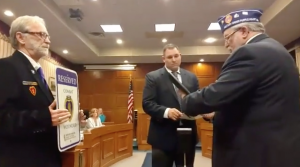 Mayor William Judge accepts a plaque from Chapter 699 of the Purple Heart recognizing Barberton as a Purple Heart City. 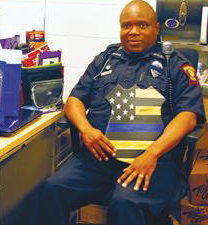 Officer Kennith Cheatham retires after 29 years of service to the Barberton Police Department.