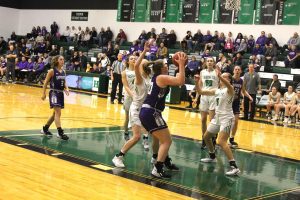 Sophomore Laney Kaisk goes up for a shot at Highland.

Barberton’s girls basketball team lost its sixth game by fewer than three points this season in a 45-43 season-ending loss at Highland in the sectional finals.

The team finishes the season with a 10-14 record while Highland improves to 19-4 and advances to the district semifinals against Hoban.

The Magics got off to a hot start, as they led the game 19-11 after a Hailey Haywood 3-pointer in the second quarter. Laney Kaisk had 8 of those 19 points in a dominant opening frame. The teams traded baskets before Highland turned the game around with three straight 3-pointers to take the lead.

The teams battled back-and-forth the rest of the way. An An’taniyah Easter free throw tied the game at 39 late, and Highland retook the lead with a basket, but senior Haley Anzaldi tied the game again with 2:45 remaining. Highland followed that with a 3-pointer 15 seconds later, and a wild two and a half minutes followed.

After a Barberton turnover Highland had a chance to make it a two-possession game, but the Magics’ defense stood strong by forcing a five-second violation on a Hornet inbound. Haywood followed that with a layup to cut the lead to 1 with one minute remaining.

Barberton then chose to foul and force the Hornets to make free throws, and it worked as they missed the first shot on a one-and-one. However, the ball went out of bounds off a Magic and Highland kept possession. The team used the strategy again and it paid off, as they again missed a foul shot and Kaisk grabbed a rebound.

Kaisk was fouled, and she went to the line, but also missed the first shot on a one-and-one. This time Barberton got some luck, as the ball went out on Highland. Kaisk had another chance, as she cut to the net off the inbound, but her contested layup was no good. Highland went to the line and made the first free throw and missed the second.

The Magics attempted to tie the game, but a questionable offensive foul on Anzaldi gave Highland the ball with seven seconds left. Barberton’s defense once again kept them in the game, as they swarmed the Hornets and forced them to throw the ball away. The team couldn’t take advantage of the mistake, as Kaisk’s pass to Haywood cutting to the hoop was deflected and stolen.

Highland was fouled and missed both shots, but Haywood didn’t have time to get off a good shot and missed from beyond half court.

“Our girls just fight so hard, all year long against good opponents we just fought, fought, fought,” said Head Coach Ken Rector. “Obviously there’s a reason behind everything, I just wish I knew what it was right now because we certainly played well enough to win. Highland’s a really good team. We had chances but credit to them for winning the game. But my heart just breaks for the girls in that locker room because they’ve given it all they had and for whatever reason it didn’t bounce our way.” 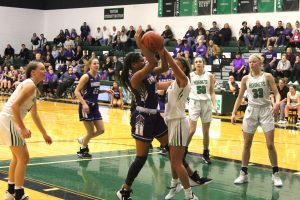 An’taniyah Easter is fouled on a shot against Highland. 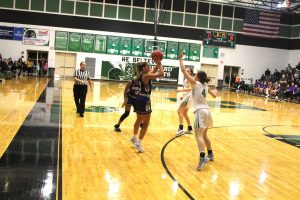 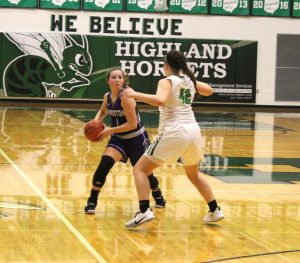