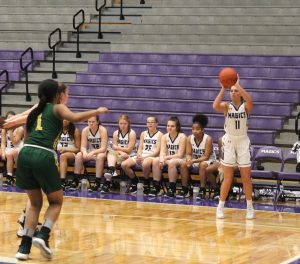 Barberton Junior Hailey Haywood shoots a 3-pointer in an opening round win against Firestone.

The Magics (10-13) will play at Highland after defeating Firestone in the opening round, 53-29 Feb. 15. The team played Highland twice this season, including a 1-point loss Jan. 11.

The close loss has the team feeling good about its chances in the tournament game. “We had them on the ropes last time we played there, we actually played them well both times this year” said Head Coach Ken Rector after the win against Firestone. “They’re very good, they’re 18-4. I think our girls have confidence against them, it’s not a bad matchup. They play three guards and two post players, we play three guards and two post players. We’re not happy to play an 18-4 team, but at least we know them and I think it will be a good game.”

The winner will move on to the district semifinals Tuesday, Feb. 25 at Medina High School against the winner of Hoban and Wooster, 6 p.m.

The Panthers (16-6) had a first round bye to open the tournament, and will open with a home game versus Canton South. The Wildcats defeated conference rival Alliance in the opening round, 38-16.

The winner will likely play top-seeded Buchtel in the district semifinals at Lake High School Wednesday, Feb. 26, 7:45 p.m., but Head Coach Brian Miller knows the team can’t underestimate Canton South. “Canton South has a good team, they won (15) games this year,” Miller said after the team’s loss at Lake Feb. 10. “We don’t take anyone for granted, we play every game like it’s a championship game. We’ll be ready, we like our chances at home.” 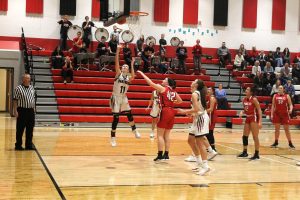 Norton Freshman Bailey Acord makes a layup in a win against Field.