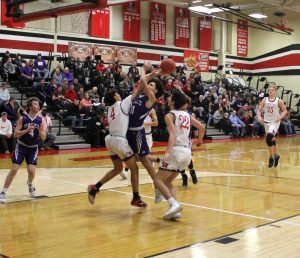 Sophomore Tony Fox fights through contact from a Kent player.

Barberton’s boys basketball team benefitted from a strong second half to defeat Kent Roosevelt 64-54 on the road.

The game featured more scoring than the first meeting, when the Magics won 35-33 Jan. 10. Barberton jumped out to an early 15-7 lead with all 17 points coming from Jamair Blackmon and Anthony Cook before Bennett Miller made two free throws. Blackmon led the team with 21 points and 10 rebounds while Miller added 14 points and Cook totaled 13 points and seven rebounds.

The Rough Riders opened the second quarter on a 13-5 run to take a 2-point lead before Barberton came back to take a 30-28 lead into the half.

Barberton finishes the regular season with a 15-7 overall record and 8-4 mark in Suburban League American Conference games. They now will focus on the postseason tournament, beginning with a first round game at home versus Cuyahoga Falls Wednesday, Feb. 26, 7 p.m.

The team would advance to play at Twinsburg in the sectional finals with a win, but Head Coach Kyle McBride knows the team can’t overlook Cuyahoga Falls. “It’s absolutely important,” McBride said. “They have a big kid and big kids have given us problems. It’s a new season and I’m sure (Falls’ Head) Coach (Todd) Taylor is preaching, ‘Our record doesn’t matter, we have a chance to go to a good shooting gym and shock the world.’ We’re going to go out and take their best punches and hopefully we can execute like we did in the second half and take that next step.” 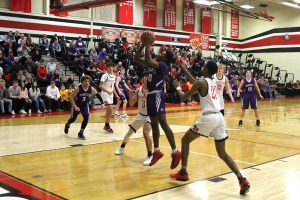