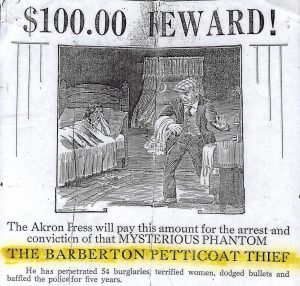 One of the most colorful criminals in the city of Barberton’s history is the notorious petticoat thief, a lawbreaker who left an unsolved trail of crimes spanning at least 10 years.

The thief began his career in 1919 by stealing silk undergarments from clotheslines, which earned him his name as the petticoat thief. He later transitioned to breaking and entering, and his prime targets were upper class, recently married women.  Eventually city council offered at $1,000 reward for his capture, dead or alive. Read more about the petticoat thief in the Feb. 20 edition of the Barberton Herald.

52 issues for only $20 inside Summit County.