Norton’s basketball team finished their season with a 60-53 loss at Coventry in the opener of the OHSAA postseason tournament.

Both teams struggled to score early, as Norton led 6-4 after one quarter. The Comets blasted the Panthers in the second, as they outscored them 23-6 to take a 27-12 halftime lead. “You look at it, we won the first, third and fourth quarter, unfortunately they beat us 23-6 in the second quarter,” said Norton Head Coach B.J. Sanderson. “That second quarter was like a blur, we couldn’t score and we couldn’t stop them. You can’t dig yourself a hole like that.”

Coventry led by as many as 17 points in the fourth quarter, and it looked like the game was over before Norton’s Tommy Reynolds nearly singlehandedly brought them back. The junior made two free throws and a layup before the Comets made one free throw. He then took a Larry Harper pass and made his first 3-pointer of the game and immediately stole the inbound pass, scored, drew a foul and made the foul shot.

That 10-point sequence cut the lead to 8, and after a Coventry basket junior Eli Hirst made a 3-pointer and Reynolds followed that with another basket to make the score 56-51 with 1:22 remaining. The Comets made one basket before Reynolds added two more free throws, and his 3-point attempt that would’ve cut the lead to 2 went halfway in but bounced out, and the Comets made two free throws to seal the victory.

Devin Pauley and Ronnie Thompson each scored 13 points for Coventry in a balanced scoring effort, as LaGreer Surles and Kenton Duty followed with 9 points and Cameron Ray added 7 points.

The Panthers finished the season with a 12-11 record while Coventry improved to 14-9 and advances to the sectional finals at Louisville Friday, Feb. 28, 7 p.m. Sanderson talked about his appreciation for the team’s lone senior Steven Cruz, who didn’t suit up for the game. “Steven is as good as a kid as you’re going to find anywhere,” Sanderson said. “His season didn’t go as he wanted, he was hurt 90% of the year. But he’s a great kid, great attitude, he’ll be healthy by baseball (season). He’ll have a great baseball season and I hope to see him play in college because that’s what he wants to do. He’s a great baseball player and I’ll be there to cheer him on because you’re not going to find a better kid than Steven Cruz.”

The rest of the team will return for next season, including injured junior Phillip Wallace, who missed the last month of the season due to a knee injury. “I’m really proud of our kids for not quitting and handling adversity like they did this year, I really think they did it well,” Sanderson said. “(Tonight) we looked like a bunch of new guys who weren’t used to the atmosphere. We’ll get better from it, we’ll have everybody back. I’m not happy winning 12 games this season, but considering what happened to us I think a lot of teams would’ve had six wins. I think we fought hard to get every single win we got. I think our kids battled, we won some games this year that we shouldn’t have won, and that’s a testament to them. We had a lot of different kids step up this year, but we can’t be happy. We have a ton of sophomores and juniors so this spring, summer and fall are going to be competitive and they’ll have to be ready to compete or someone will take their spot.” 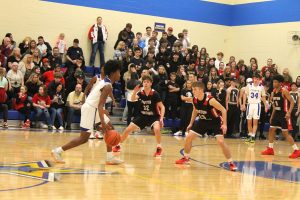