Anthony Cook goes up for a layup against Cuyahoga Falls.

Barberton’s Sonny Fox opened the game with a 3-pointer, but Cuyahoga Falls outplayed the Magics and led for most of the first three quarters, until a Jamair Blackmon shot tied the game at 47 going into the fourth quarter.

The Magics led by as many as 6 points in the fourth, but the Black Tigers came back to tie the game with a 3-pointer with just 10 seconds remaining. D’Lawrence Scott had a chance to win the game at the buzzer but his jumper from the foul line was no good.

A Blackmon basket gave the team a 65-64 lead with one minute remaining, and Sonny Fox came up with a big steal to get the ball right back. Barberton was able to dribble off nearly all but 12 seconds of the clock, when Blackmon was fouled. He made both foul shots, and the Black Tigers’ game-tying 3-point attempt was no good.

“That was a great feeling getting that steal,” said Fox. “(Cook and I) were able to double-team him and force the turnover.” The senior was injured early in the second quarter but returned before the half and immediately took a charge. “I’m all good now, it’s just some pain in my back. I want us to win it all so even if I’m hurt I’ll take charges and do all the dirty work to help us win.”

The Magics faced a tough decision on the Black Tigers’ last possession on whether to foul or play defense and defend against a 3-pointer. Head Coach Kyle McBride chose defense and it worked. “We came to a collective decision to sit down and play defense,” McBride said.” I thought a lot of things went perfect for Cuyahoga Falls. They played really hard, and the way the game was going, we thought they weren’t playing great on offense, a lot of their points were coming from loose balls, then grab it and shoot it. So we played defense, and he chucked that ball, I think with his eyes close and it almost banked in.”

Anthony Cook once again led Barberton with 24 points, 10 rebounds and six assists. The junior made all eight foul shots he took in the game and scored 8 points in the third quarter when the team scored 21 points. “When I drove they didn’t have backside help, so I was able to score,” Cook said, “and if they did I just kicked it out to my teammates who were open.”

One change to the lineup was adding Miller to the starting lineup while Scott came off the bench, but both players played nearly the entire fourth quarter and overtime. “We were kind of curious how (Scott) would respond to that, and he was a guy at the end of the game that we couldn’t take off the floor. He played within himself, he ran our offense and did the things he needed to do to stay on the floor. The past few games our offense has been more smooth with Bennett on the floor, but they were both on at the same time at different points in the game.”

The Magics improved to 16-7 while Cuyahoga Falls finishes with a 2-21 record. “I told our guys that (Cuyahoga Falls) was going to come out and give us their best effort. It’s a new season, records don’t matter, they’re still a Division I team. But our guys came out and you could tell that just by stepping on the floor they were 30 points better than Cuyahoga Falls. They punched us in the mouth, and I told our guys at halftime that they were in for a dogfight now because we allowed them to get confidence, and (Kyler Tepus, 30 points) and (Brennan Guerin, 14 points) knocked down big shots for them.”

The team moves on to play at Twinsburg Friday, Feb. 28, 7 p.m. after the Tigers defeated Kenmore-Garfield 71-33 in the first round. Twinsburg is the four-seed while Barberton is the five-seed. “(Twinsburg) is fairly identical to us,” McBride said. “They get out and run, they’re high energy, full court style. It will come down to who wants to play defense and execute on offense. We can take a few seconds off the clock on offense and get a highly calculated shot, and come out and play defense I like our chances. If we try to get into a run-and-gun type game and go back-and-forth with the like the old way, it’ll be a long night.” 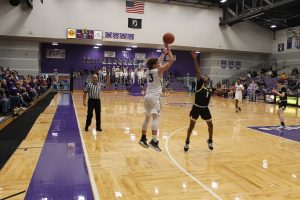 Tony Fox pump fakes after driving to the net. 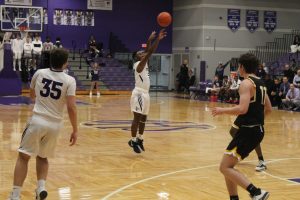