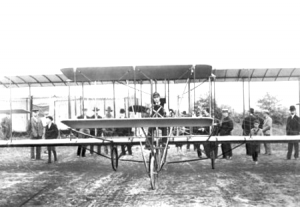 Barberton inventor and aviation enthusiast Michael Paridon takes off in his plane.

Barberton is known for its past involvement in the rubber and match industries, but what many don’t remember is its short-lived involvement with aviation.

The Barberton Public Library held a talk centered on the city’s history with flight as part of their monthly Local History Program. The event, led by Local History Librarian Sarah Hayes, focused on mechanical mastermind and Barberton resident Michael Paridon. “In his more than 52 years with the Diamond Match company, Paridon appeared to have patented over 70 devices,” explains Hayes. Most of his experimentation centered around match machines, but his true dream was to make Barberton the aviation capital of the world. Read the full story in the Feb. 27 edition of the Barberton Herald.

52 issues for only $20 inside Summit County.