An idea to help “landlocked” Barberton restaurants participate when outdoor dining resumes May 15 in Ohio was shelved shortly after it was suggested.

At least three restaurants along Second Street and Tuscarawas Avenue have no patios. The Downtown Barberton Merchants Association worked to organize a “block party,” closing off parts of Park and Tuscarawas avenues May 15 from 5 to 8 p.m. to allow proper outdoor, socially distanced dining. The association posted a cancellation on its Facebook page May 14 about an hour and a half after posting the announcement.

“Running around and talking to all the merchants, about half were not going to open,” Association President Joyce Coburn told The Herald.

She said some of the merchants were concerned due to their ages, placing them in the higher-risk groups for the disease.

“And looking at other cities who tried to do something like this, they got mobs they couldn’t control,” Coburn said.

She added that the three restaurants in question weren’t ready for such an opening yet. One, she said, was reluctant to bring employees in off unemployment for a single day.

“This is my fault,” Coburn said. “I should’ve waited until I heard back before announcing anything.”

The idea was only shelved, though. It isn’t dead. The block party was reset for two days the following week, May 21 and 22.

“Instead of one day this weekend, we’ll have two next weekend,” Coburn said. “We’d like to be more prepared and do it better.” 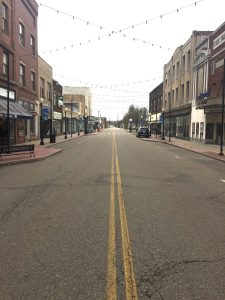