A couple dozen citizens gathered with city officials under a Decker Park pavilion the evening of June 18 to talk about the state of race relations in the Magic City.

Dubbed “A Conversation in the Park,” the event was organized by Barberton resident Willie Jenkins.

“I put this together because I believe the best thing is to sit down and talk,” Jenkins said. “This is not to point fingers. It’s to discuss how to make the city a better place.”

Jenkins said it doesn’t matter where a conversation begins as long as it takes place. He acknowledged that Barberton has been spared the problems of other communities after the death of George Floyd in Minneapolis and his goal for the dialogue is to keep it that way.

“I hope we can be an example to all the surrounding communities,” Jenkins said.

After a brief opening prayer by Bishop Emmet Lee of Barberton’s Galilee Missionary Baptist Church, Mayor William Judge was the first official to address the audience.

“I seldom refer to Barberton as a city,” Judge said. “I most often call it a community.”

He said most residents have that same sense.

“We’ve been doing a great job of working as a community,” Judge said. “People understand that what affects one person affects everyone else.”

He said 2020 had been “a crazy year,” with B&W leaving, followed by the coronavirus pandemic and then protests and riots.

Asked by Jenkins if he has had any conversations with the police department about how they conduct business, he said those conversations take place all the time and predate the recent protests.

“We review things almost on an annual basis,” Judge said. “We get a lot of things from legislators that they think look good when they’re put on paper but when you go to put them into practice, they stink. We talk a lot about how best to make things work.”

Police Sgt. Mike Casey, one of the second shift supervisors, said that Baberton officers are proud to serve the community.

Jenkins said that although there has only been one small, peaceful protest and no riots in Barberton, that didn’t mean there were no problems. He described several occasions where people have “rolled down windows” and shouted invectives at him he didn’t care to repeat.

“You can probably guess,” Jenkins said. “They’re instigating and the time will come they will say that to the wrong person and they won’t take it.”

He asked if it would be best to take down a license number and make a report.

Police Chief Vince Morber, not planned for the event because he’d taken a vacation day, ditched some home improvement projects and showed up at the event anyway.

“Absolutely report it,” Morber said. “Tell us when it happens. Telling it on social media three hours later does not good at all.”

“We’ll be glad to have a conversation with that person,” Casey added. “We’ll go up to them and say, ‘Hey! I hear you were a real jerk a little bit ago. What’s up with that?’”

Lee asked about police in the schools, saying that had a big impact when he was a child. Morber beamed at the opportunity to boast about Barberton’s school resource officer program.

“Our people had the foresight to get the school resource officers in before something happened,” Judge added.

Lee also explained that his white friends have difficulty understanding his experience.

“My story is very different from that of my white friends,” Lee said. “I experience things they don’t and I think sometimes it seems like I’m delusional. But I am not delusional. I have a bachelor’s degree, two master’s a doctorate and I’m about to defend another doctorate. I am not delusional. And I think sometimes we experience these things and people can be dismissive of it. And when that happens enough, when the voices go unheard, the pot can boil over and that’s what you see happening with the riots. A riot is the voice of the unheard.”

Jenkins complained that he sees no people of color in positions at the city building or doing work in the streets and parks. Judge explained that it’s a matter of getting in and taking the civil service tests, which are offered several times a year. Jenkins suggested targeting minority neighborhoods with the test announcements.

Judith Lynn Lee, from Norton, was in the audience taking notes and said she plans to host a similar event in that city. 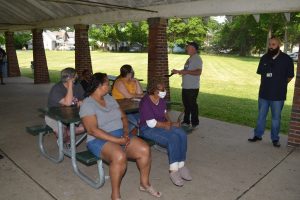 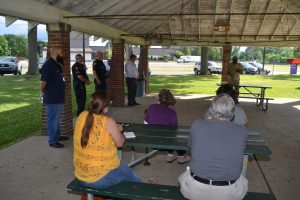 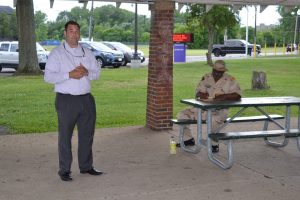 Bob returns to the radio