A car chase Sept. 12 left a downtown church damaged and a suspect gone.

Around 5 p.m. that afternoon, an officer tried to pull a car over on Sixth Street Northwest for a lane violation and recognized the driver, Mark Hartley, 42, of Seventh Street Northwest, as having a suspended license and two outstanding felony warrants.

“He headed up that alley and caused some damage to the church,” Barberton Police Officer Marty Eberhart said.

The officer chased Hartley as far as 31st Street but called it off for public safety as speeds increased.

“We had the suspect identified,” Eberhart said. “There was no point in continuing.”

In addition to the warrants he already had out of Summit and Portage counties, Hartley now has a third felony warrant against him for fleeing and eluding, as well as driving under suspension.

Anyone who knows where officers may find Hartley is encouraged to call the Barberton Police Department at 330-745-2181.

Back at the church, Pastor Mike Prebynski, who had gotten a call from the police, was surveying the damage.

“Outside, it doesn’t look like it’s anything but the rail,” Prebynski said. “But the inside wall is trashed.”

A contractor was due to examine the damage within a few days of this interview. Prebynski didn’t have a guess about how much it would cost. However, the impact had knocked the wall enough to shake the interior plaster coating loose in a basement children’s classroom, cracking it and knocking some off and damaging a whimsical mural of Noah and his ark. 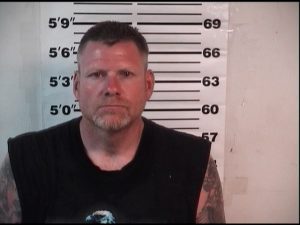 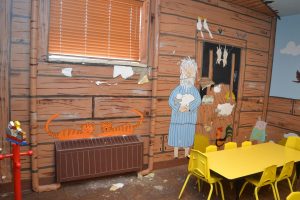 HERALD PHOTO/Bob Morehead From the outside, it looks like only a metal handrail was lost but the impact from a Sept. 12 car chase damaged the interior wall of a children’s classroom at First Baptist Church.