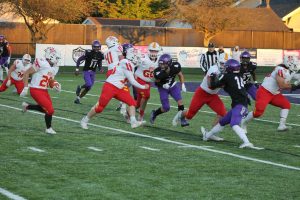 Mason Dewitt (4) fights through a block to make a tackle against Brecksville.

The Magics once again got behind early and couldn’t come back, as they lost 45-31 at home versus Brecksville-Broadview Heights on Senior Night.

The Bees, who are led by University of Iowa commit Joe Labas at quarterback, scored on their second possession as Labas threw a 16-yard touchdown pass to Jeremy Jonozzo. After the Magics turned it over on downs the Bees marched down on eight plays and scored on an 8-yard Garrett Kubitz run to make it 14-o at the end of the first quarter. Brecksville out-gained Barberton 148-27 in the first quarter.

Barberton would get on the board in the second on an impressive 14-play, 72-yard drive that ended in an 18-yard touchdown run from Cam Macon, who ran up the middle on fourth down and broke free. The extra point was no good, and Brecksville had just enough time to get in field goal range, as a 23-yard field goal made it 17-6 Bees at the half. 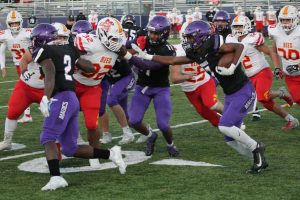 Glen Parker follows his blockers during a run.

Kubitz would score twice in the third quarter on runs of 49 and one yard to make it 31-6. After his second the Bees kicked it deep to junior Glen Parker, who returned the kick 85 yards for his second return touchdown of the season. Kubitz scored his fourth touchdown of the game early in the fourth to make the score 38-12, but again the Magics didn’t give up, as Chanden Lee threw an 18-yard touchdown pass to Kaige Lowe.

A Keyandra Turner sack gave the Magics the ball right back, and Lee threw a 72-yard touchdown pass to Derrick Vaughn to cut the lead to 13. The game nearly changed on one play on the Bees’ drive, as a screen pass from Labas was deflected by Turner, who nearly intercepted the pass, but it fell just out of reach. Turner would have likely scored on the interception, but instead the Bees ran more clock and scored on an 11-yard Kubitz run. Barberton ended the scoring with a 50-yard touchdown run from Kobe Campbell.

Lee completed 8-of-19 passes for 184 yards and two touchdowns with one interception. Macon rushed 14 times for 75 yards and caught two passes for 16. Parker also ran six times for 22 yards and Dylan Sutton had a 49-yard catch. Defensively, Turner recorded two sacks while Roosevelt Andrews had one sack. John Jackson and Lowe intercepted one pass each.

Before the game the team honored its seven seniors. The seniors are Charlie Hornacek, Turner, Campbell, Sutton, Vaugh, Tony Valencheck and Nathan Heitic.

The Magics fell to 0-4 with the loss while Brecksville improved to 3-1. Barberton returns Friday, Sept. 25 when they play at Wadsworth at 7 p.m. 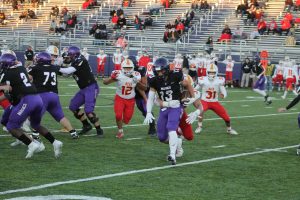 Senior Charlie Hornacek is hit behind the line of scrimmage in the team’s 45-31 loss to Brecksville.