The Herald’s Warrant of the Week for Sept. 24 is in custody after a standoff Sept. 22 in Akron.

Bradley Greathouse, 33, was wanted in Norton for grand theft of a motor vehicle, felony theft and criminal damaging. He was also wanted by the Adult Parole Authority as an escaped parolee and he was wanted in Akron for breaking and entering and another stolen vehicle.

When officers arrived, a knife-wielding Greathouse barricaded himself inside the apartment and threatened to harm himself and officers. A SWAT team arrived and started negotiating and he was finally taken into custody with no further incidents.

Greathouse was taken to Cleveland Clinic Akron General Medical Center for an evaluation and then to the Summit County Jail. 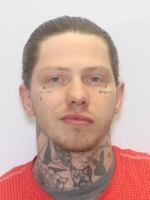