For 18 years, a bench of the Barberton Municipal Court was occupied by Michael Weigand.

Weigand retired in 2007 and died Sept. 23 from complications from a fall a week earlier. He was 78.

“He was helpful and practical in a quiet way,” Judge Jill Lanzinger told The Herald. “He supported me in so many ways when I was a new judge.”

Lanzinger said that Weigand was seen all over Summit County.

“We was very approachable,” Lanzinger said. “He was very professional but had this casual air. Sometimes when he’d have court on a Saturday he would wear a funny sweater or tennis shoes.”

He said Weigand’s legacy in the court, helping offenders turn their lives around if they are willing, lingers, particularly in the probation department.

“He was a true character,” former Judge David Fish said. “He was a raconteur and a bon vivant. And a mentor to me. I tried to pattern my judicial approach after his. He believed we had hard-working, hard-living folks who sometimes make mistakes. He would punish if it was necessary but not so as to put them in a hole.”

He said Weigand also had respect for attorneys and could differentiate between a passionate defense and disrespect.

Weigand was elected in 1989, taking the bench in 1990 and was re-elected two more times, finally retiring in 2007. He continued to adjudicate in retirement, however, filling in as a visiting judge in both Barberton and Summit County. Proud of his German heritage, according to McKenney, he leaves behind his wife, Caroline, daughters Lesley McCauley and Amy Griffin, grandchildren Megan and Michael McCauley and Owen and Anne Griffin. The funeral will be at St. Augustine Church in Barberton Oct. 3. 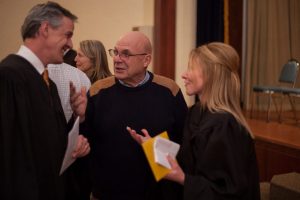