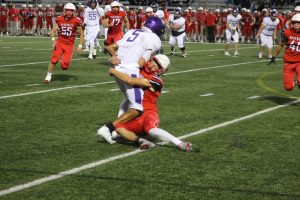 Derrick Vaughn is tackled by Skyler Kries after making a catch at Wadsworth.

Barberton’s football team picked up their first victory this season with a 37-30 win on the road at Wadsworth.

Running back Cam Macon carried the load on the ground, as he rushed 30 times for 124 yards and two touchdowns. Kaige Lowe (five receptions for 124 yards), Vaughn (three for 102) and Hornacek (six for 91) each caught passes. Vaughn also threw a 44-yard pass and ran for seven yards on a fake punt. Defensively, Roosevelt Andrews had two sacks while Caden Best, Demarion Cook and Keyandra Turner also had one sack, while Turner also recovered a fumble.

Wadsworth was led by senior quarterback Mitch Evans, who will play for the University of Notre Dame next season as a tight end. The 6-foot-7-inch quarterback completed 17-of-38 passes for 268 yards and three touchdowns and rushed seven times for 30 yards and another touchdown. Senior running back Brennan Gray rushed eight times for 71 yards. Anthony Cirino led Wadsworth in receiving with six catches, 130 yards and two touchdowns.

The Magics improved to 1-4 with the win while Wadsworth falls to 1-3. Next, the Magics will play at Suburban League American Conference rival Highland Friday, Oct. 2 at 7 p.m. in the final game before the playoffs begin in Week Seven. 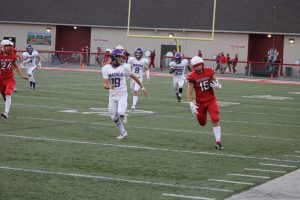 Junior kicker Eston Brown chases down Anthony Cirino to save a touchdown on the opening kickoff of the game.