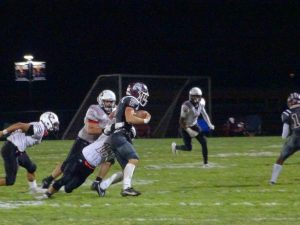 The Panthers and Bulldogs fought in a close, back-and-forth game that needed overtime to determine the victor.

A 28-yard field goal from Woodridge preceded a Norton turnover on downs to give Woodridge a 23-20 victory.

Norton got the scoring started in the first quarter when Toby Tatka threw a 12-yard touchdown pass to Jason Hippler. After two Woodridge touchdowns Nathan Merrill ran for a 57-yard touchdown to make the score 13-13 going into the half.

Each team scored on their second drive of the third quarter. Norton’s came on a 9-yard run by Merrill. Woodridge drove down deep into Norton territory late in the fourth, but their drive ended on an interception by Dominic Graham in his own end zone.

The teams went to overtime and the Bulldogs converted on a 4th-and-10 to start, as Norton was called on a controversial pass interference penalty on a throw to the goal line. The Bulldogs were ready to go for it on a 4th-and-1 situation at the 6-yard line, but a false start penalty changed their minds and they kicked the field goal. The game ended when Toby Tatka’s pass to Seth Finegan was one yard short of the 15-yard line on fourth down.

The Panthers fall to 1-4 on the season and will return home to play undefeated Streetsboro Friday, Oct. 2 at 7 p.m. Woodridge improved to 2-3 and will play at Coventry next Friday. 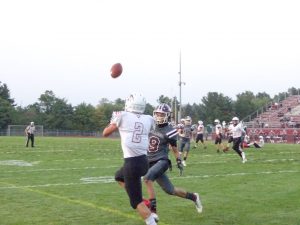 Jason Hippler catches a touchdown pass early in the Panthers’ 23-20 loss to Woodridge.