The name is ubiquitous. Two streets bear his name, one on the East Side and the other running through downtown and the Near West Side. At the end of the latter sits a Barberton Chicken house with the name. There’s a statue of “him” on a triangle in the North End, a critical landmark by which locals give directions.

Every Barbertonian is superficially familiar with Chief Hopocan. But what do we really know about him? Who was he? When did he live? What is his real connection with Barberton?

The Herald is going to spend a couple weeks digging in a little bit and answering these questions. But the series is going to run more like a research paper than a news feature. Instead of interviews, the author consulted multiple sources. They are:

• “Ghosts Along the Tuscarawas,” By Stephen E. Kelleher and Jessica King, 2009

The first thing to understand is that his name wasn’t actually “Hopocan.” In the Lenape language, “hopocan” means “pipe.” Specifically, a pipe for smoking tobacco. His given name was “Konieschquanoheel,” which translates to “Maker of Daylight.” He was a war chief in the Wolf Clan of the local band of Lenape (also known as the Delaware) and, since his nickname translates as “Pipe,” the British called him “Captain Pipe.” In the histories, the name “Hopocan” seldom appears. He’s known by that name almost exclusively in Barberton. In the books, he’s everywhere as “Captain Pipe.”

A birthdate for him is hard to pin down. He shows up first in the histories fully grown and leading war parties.

However, local lore has him encamped on the Portage Trail at some point in the 18th century and moving a bit west to settle the New Portage. A later village would bear that name and this is why the statue was erected where that village had been. However, the location of the statue was based on the land being available in 1911. The actual camp, again according to local lore, was at the little settlement of Young’s Corners, where Wooster Road North and West State Street intersect today.

Hopocan was a signatory of the Treaty of Fort Pitt in September 1778, allying his band with the fledgling United States against the British.

This relationship was established in spite of the fact that in February of that year, a group of Pennsylvania militia, which included the not-yet-traitorous Simon Girty, embarked into the northeast quarter of what would one day be Ohio in search of a putative British weapons cache along the Cuyahoga River. They never made it there but they did find a small salt camp of Lenape near where Youngstown is today. The raid killed Hopocan’s brother, their mother, and a young boy who ran out and hid in a tree. While Hopocan retained his alliance with the United States at least through September of that year, Girty was horrified and took his considerable talents to the British, making him a significant hero to the loyalists and Canadians and the worst villain of the western frontier to the Americans. This sorry affair came to be known as “The Squaw Campaign.” Besides Girty, it also had Maj. William Crawford, another man we will meet later.

Whenever it was that he had camped at the New Portage, Hopocan was well established far to the south by the time of the American Revolution, based mainly in Coshocton.

Hopocan had signed the Treaty of Fort Pitt but he never really forgave the Americans that affront and, when British agents came to Coshocton to rally the Indians to their cause, Hopocan signed on. Girty had been instrumental in enlisting Indian support for the British cause.

In the spring of 1781, a group of Lenape Moravian converts who had been evacuated were sent back to Gnadenhutten on the the Tuscarawas River to glean what was left in the fields. While they were there, a group of Virginia militia arrived, gathered them all in a common building and, the next morning, killed them all. There were 96 men, women and children, all Christian pacifists.

Understandably, the Indians were outraged over this and Hopocan wanted nothing less than blood. His chance came the following year.

People mistakenly believe the Revolution ended with Cornwallis’ surrender at Yorktown in 1781. The war in the western frontier actually continued a few years beyond that and in May and June of 1782, Col. David Williamson was leading a punitive campaign against the Indians in the Ohio Country. Crawford, now a colonel, was with him. As they were camped in a copse of trees in what is now downtown Upper Sandusky, a place that came to be known as “Battle Island,” a huge force of Indians, the Girty brothers and Chief Hopocan among them, surrounded them and eventually killed or captured most. Williamson, the actual architect of Gnadenhutten, escaped with 250 men. Crawford was not so fortunate.

Hopocan, perhaps aware of his role in the death of his mother and brother, would not believe Crawford’s innocence in Gnadenhutten. Simon Girty pleaded for him to be spared but Hopocan, up to this point one of Girty’s closest friends, basically told him to shut up or he was next.

Crawford was sentenced to death and was tied to a tree, surrounded by Indians, and slowly tortured to death over the space of four hours. Witnesses say that he begged Girty to shoot him but Girty refused, well aware he would be killed if he did.

By the time of the Battle of Sandusky, Hopocan was living in his own town on the Sandusky River, noted on maps of the era as “Pipe’s Town.” It is said that he died there in 1794. There are also accounts that his son took up the name “Captain Pipe,” but this is unclear.

Next week: A strange legend of Chief Hopocan 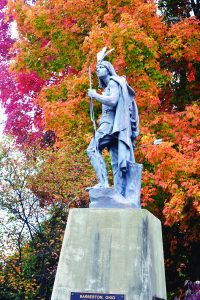 HERALD PHOTO/Bob Morehead
As he has since 1911, “Chief Hopocan” looks east from the New Portage to the Old.