Barberton’s football team couldn’t handle the high-flying offense of Brecksville-Broadview Heights, as the Magics were eliminated from the postseason in a 55-30 loss.

The Bees jumped out to a 15-0 lead before the game was delayed for an hour and a half due to a lightning delay. Brecksville would score again to make it 21-0 before the Magics scored right before halftime on a 41-yard pass from Chanden Lee to Charlie Hornacek.

Each team scored on their first possession of the third quarter, as Lee found Hayden Macko on a 9-yard pass to make it 28-14. Brecksville would then score on their next two possessions to make it 41-14 and put the game out of reach. Barberton would score on touchdown passes from Lee to Kaige Lowe and Hornacek, as well as a safety with six seconds left in the game on a bad snap.

Lee completed 19-of-35 passes for 301 yards, four touchdowns and one interception. He also led the team in rushing with 46 yards on eight carries. Lowe was his favorite receiver, as he caught seven passes for 107 yards. Hornacek (six for 92), Derrick Vaughn (two for 50), Macko (two for 34) and Glen Parker (two for 18) also caught passes. The team’s leading rusher Cam Macon was held to 11 yards on six rushes.

The Bees move on to the regional semifinals to play the winner of Avon and Highland, while the Magics fall to 3-6 and wait to see what their future holds. The team could play more regular season games or finish their season. 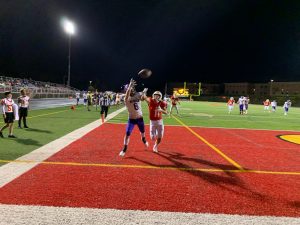 Hayden Macko catches a touchdown pass in the Magics’ 55-30 loss at Brecksville.