Barberton’s football team will play at Brecksville-Broadview Heights in the OHSAA tournament’s third round.

The Magics (3-5) will look for revenge against the 6-1 Bees after Brecksville won the regular season matchup, 45-31. Each team won their second round game, with the Magics beating St. John’s Jesuit 21-14 and the Bees beating Oregon Clay 49-33.

For those that can’t be at the game, you can watch via livestream on the Brecksville-Broadview Heights Youtube channel at https://www.youtube.com/watch?v=oedS-PLXRCQ&feature=youtu.be.

The Bees are led by future University of Iowa quarterback Joe Labas, along with running back Garrett Kubitz and receiver Jeremy Jonozzo. Kubitz was dominant in the first matchup, as he rushed for 194 yards and five touchdowns.

Kickoff is set for 7 p.m., and the winner will play against the winner of Avon and Highland in the regional semifinals next Friday night. 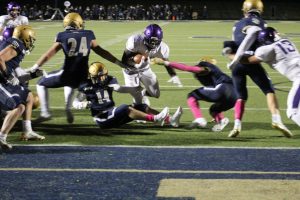 Cam Macon eyes the end zone on one of his three touchdown runs at St. John’s Jesuit.