A total of 16 firefighters from four departments responded Thanksgiving Eve to a garage fire on 31st Street Northwest.

Police had blocked 31st from Shannon to Belleview avenues.

According to Barberton Fire Department Capt. Duane Milford, they got the call around 8:30 p.m.

“Since it was a structure fire, we automatically sent out the call for mutual aid, like we always do,” Milford said. “That brought Norton, Copley and New Franklin with us.”

Milford said the homeowner had noticed a problem with the power to the house and noticed the detached garage out back on fire and called it in.

“I was the first unit on scene and I could see the flames coming through the sides as I pulled up,” Milford said.

Two line teams, one from Barberton and one from Norton, attacked the fire and had nearly all of it out within 15 to 20 minutes; the house was untouched. They quickly discovered a problem, though, as they hit some of the flames with the water and got sparks.

“There were two magnesium blocks for the motorcycles on fire,” Milford said. “You can’t put those out with water. All you get is a lot of sparks.”

Milford said the street department was bringing a load of sand, which firefighters would use to bury the burning blocks of magnesium.

No one was injured and a cause had not yet been determined as of this writing. 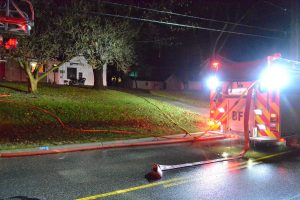