Emmy Garland lost her niece, Elissa “Lissy” Garland, to a long-time battle with addiction earlier this year. According to Emmy, Lissy was doing really well for about a year while she was pregnant. She also had plans to enroll in college to become a counselor.

On April 26, Lissy passed away. Emmy said, “My niece had overdosed and died with her 12-week-old baby in his bassinet.” Even as a former police officer, she explained it’s something she’s always dealt with but she wasn’t really affected by it until Lissy lost her life. Emmy has been trying to find ways to honor Lissy and although she dedicated a Christmas tree to her at Columbia Woods park, she didn’t think that was enough.

Emmy thought about how much Lissy loved her son, Malachi, and how there are so many other children who are affected by addiction. “These children are innocent. Their parents may make bad decisions, but that isn’t their fault.” She then came up with an idea to help those children in need this holiday season.

Emmy turned to her Facebook group, “Norton Talks”, and was able to collect enough donations to help 51 children in just 13 days. She explained, some children have parents who have passed, or they are in rehab, prison, or a sober living home. She also said in many situations, children are being placed with their grandparents or other family members, and she was inspired to help as many families as she could.

Emmy was overwhelmed with joy when she received donations such as bikes, scooters, doll houses, barbies, and so many other toys from over 85 people in under two weeks. “Most of the people who donated did so in honor of somebody they knew who had lost their battle with addiction.”

In a letter to the men at the Safe Harbor in Norton, Emmy shared her story and inspiration to give back. “We all have a past. Let’s make that clear. There is no judgement in this letter.” She went on to explain how she wanted to turn her pain and grief into something positive. “God opened the doors for me to be able to help you. I want you to know you matter. I want to try to save your family this heartache. If just one person hears this story and it makes their life better, it’s all worth it.”

Emmy explained this program is just the beginning. She plans to create a foundation in Lissy’s honor and continue to help families touched by addiction all year round whether it be Easter, birthdays, or back to school. “She wanted to help people. This was always her dream and we are going to keep it going.” 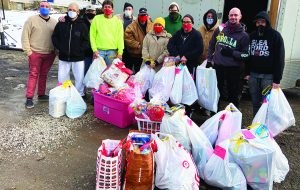