The Magics defeated Kent Roosevelt 53-29 in their first game since Dec. 5 due to COVID-19 restrictions, as the team improved to 2-3 (1-2 Suburban League American Conference), while Norton improved to 10-1 (6-0 Metro Athletic Conference) with an 84-24 win against Field at home.

Barberton and Kent played a close first quarter before the Magics outscored the Rough Riders 12-2 in the second and 17-10 in the third to cruise to an easy win.

Norton continued its dominance of the MAC, as they have now won each game against a league foe by at least 29 and by an average of 48 points. The Panthers opened with a 26-2 first quarter and 42-8 halftime lead.

Barberton returns home Thursday, Jan. 7 at home versus Southeast at 7 p.m., while Norton plays at Ravenna Monday, Jan. 11 at 6 p.m. 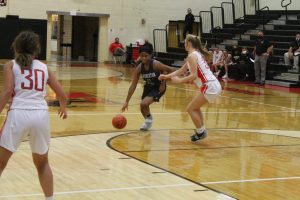 An’taniyha Easter drives to the net in Barberton’s 53-29 win at Kent.