The Magics never trailed in the game, as Cook made a pair of baskets before a Fox 3-pointer made it 7-0. Barberton led by 13 entering the fourth quarter, but the Hornets cut the lead to 2 with under one minute remaining, as the team made three 3-pointers during a 21-point frame.

However, the Magics pulled it out as Parker grabbed a rebound and scored before Blackmon was intentionally fouled and made both free throws to seal the win.

Barberton returns Saturday, Jan. 9 with their first non-conference game of the season at Canton Central Catholic at 7:30 p.m. 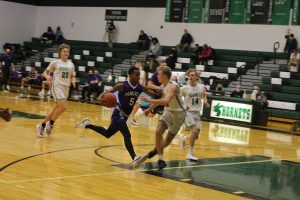 Junior forward Glen Parker drives to the net against Highland.