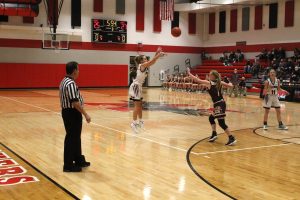 Riley Ballinger makes a 3-pointer in the Panthers’ 42-41 loss to Stow.

Norton’s girls basketball team lost a thrilling 42-41 game against Stow to fall to 12-2.

The teams weren’t scheduled to play until Jan. 18, when the game was scheduled to make up for lost games due to COVID-19. “Look I’ve been looking for a team to replace Lake (a game scheduled in February), why not play a Division I powerhouse,” said Norton Head Coach Brian Miller. “That’s a good basketball team. We didn’t play our best game tonight, we made a lot of mistakes and when you don’t play quality teams every night that happens, you get rusty.”

The Panthers jumped out to a 15-8 lead after one quarter, but Stow stormed back with 7 straight points to tie and trailed by 1 at halftime before outscoring Norton 16-8 in the third quarter to force the home team to comeback.

It took the whole quarter before Norton finally cut the lead to 1 after a Gabriella Destefano 3-pointer with just 11.4 seconds remaining. The Panthers then fouled and Stow missed the foul shot but got the rebound. However, Bailey Shutsa stole the ball on the inbound and sent a pass to Bailey Acord, but the sophomore lost possession of the ball and it went out of bounds with two seconds left. Stow missed another foul shot but the Panthers didn’t have time to score to win the game. 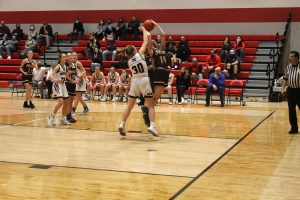 “We were down by 9 in the fourth, I think we proved to people not to take us for granted,” said Miller. “We were down 9 and a lot of teams would just fold and be done but we went at them harder and had a chance to beat them at the end. Bailey Acord has made that play a dozen times where she went coast to coast, she had a good shot at it, they just happened to get a piece of it. It looked to me like it went off (a Stow player’s) leg, but calls don’t always go your way. But I’m proud of them, to play a team that you only had one day to get ready for, kind of like a tournament atmosphere, and that’s what we need.”

The Panthers continue a busy week Thursday, Jan. 21 at Springfield at 7 p.m. They will then play Saturday, Jan. 23 at 12:30 p.m. versus Ravenna in the team’s Senior Night game before playing at Highland Monday, Jan. 25 at 7 p.m. “We’ll take it to Springfield and Ravenna and then we’ll head to Highland, another Division I powerhouse and I think they’ll look at this game and say ‘Norton’s for real’. We’re legit, we’re a good basketball team we just have to keep getting better. We’re about 75% where we’ll need to be at come February, I like where we’re at.” 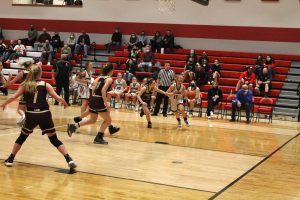 Bailey Acord drives to the net while a Stow defender tries to recover.