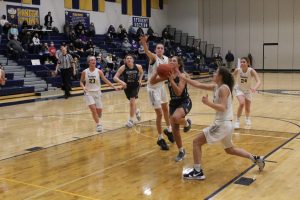 Hailey Haywood drives in to score in the Magics’ 54-52 loss at North Ridgeville.

The Magics led by 1 with 39.1 seconds left in regulation, but the Rangers made one free throw to tie the game. Barberton dribbled out the clock until there were seven seconds left, when Brenna Walker’s shot from inside the paint was blocked. North Ridgeville had one chance at the buzzer to win but the shot wouldn’t go.

The Magics scored 35 seconds into overtime on a Hailey Haywood basket, but failed to score again until there were just 21.8 seconds left, as another Haywood basket cut the lead to 3. North Ridgeville beat the full court press and made an easy layup before Walker hit a 3-pointer at the buzzer. 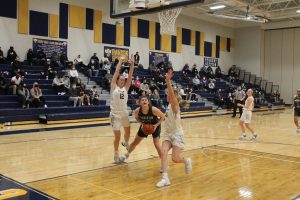 Maris Ries waits for two Rangers to fly past her before going up for a shot.

The game was back-and-forth from the opening tip, as there were eight lead changes and nine ties. Barberton led 40-34 after three quarters and led by 3 with 2:27 left in regulation before being shut out the rest of the way.

The 54-52 loss ends the Magics’ season with a record of 6-7. For the full story, read the next edition of the Barberton Herald. 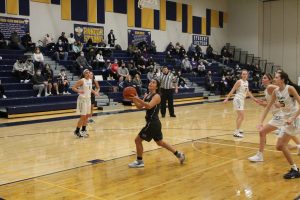 Senior Brenna Walker catches a pass before making a layup.