Barberton defeated Kent Roosevelt 72-50 at home, as the team won both matchups versus the Rough Riders this season.

Kent started off strong, as they led 17-12 after one quarter, but it was all Barberton from there. The Magics led 28-26 at halftime before scoring the first 9 points in the third to breeze to a win.

The Magics improved to 9-5 (6-3 Suburban League) and return for a home game against Aurora Saturday, Feb. 20 at 4 p.m. The team will then finish the regular season Monday, Feb. 22 at home versus Shaw before opening the tournament at Copley Wednesday, Feb. 24 at 7 p.m.

Norton finished their regular season with a 67-54 win at Woodridge to complete a perfect season in Metro Athletic Conference games.

Norton finishes the season with an 18-2 record, and they will receive a first round bye in the tournament before playing the winner of Benedictine and Holy Name Friday, Feb. 26 at 7 p.m. on their own floor. 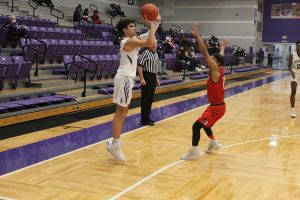 Tony Fox makes a 3-pointer from the corner against Kent.