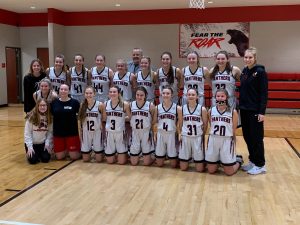 Norton’s girls basketball team jumped out to a 18-0 lead as they cruised to a 56-19 win in their postseason opener.

The team was without starting center Kaylee Murawski, who has been out since Feb. 5 with an injury, and Head Coach Brian Miller hopes to have her back for the next round. “She got the cast off, we’ll see how she is, she may play or she may not,” said Miller. “I don’t know how effective she’d be, but we can’t really worry about that. We’ve got good players stepping in to play for her, they’re young and they’ve been thrown into some roles they haven’t played before. But Tatka has done a nice job, scoring a little bit and gets a few rebounds. I’m not asking her to go get a double-double, no one can go replace what Kaylee does.”

Norton improves to 20-3 and moves on to the district semifinals where they will meet Copley. The Indians won a sectional title by defeating Buckeye 50-38 and Buchtel 39-27. “They’re like us, they have almost everyone back (from last year), they did lose a couple seniors last year. But they’re young, they’re kind of in the boat we were in last year a little bit. It’ll boil down to, with us, guard play and pressure. We didn’t show much pressure today, we didn’t want to. We’ll see what they got, I know they’ll be prepared for us, they’re well-coached. It’ll be a stiff challenge, which is fine, I like tough games.”

The game will tip-off at 7 p.m Wednesday, Feb. 24 at Norton High School. 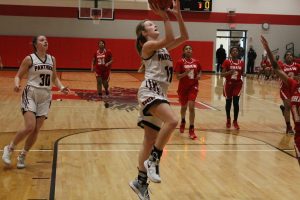 Bailey Acord goes up for a layup against Shaw.