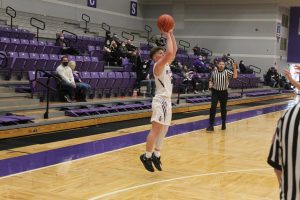 Junior Chanden Lee shoots a 3-pointer from the corner against Aurora.

Barberton’s boys basketball team completed a weekend sweep of conference opponents to improve to 10-5 on the season.

After defeating Kent Roosevelt Feb. 19 the Magics beat Aurora 73-55 to improve to 7-3 in Suburban League games.

Barberton led by 15 at halftime and grew the lead to 20 in the third. But after Anthony Cook made two free throws after a technical foul was called on Aurora, the Greenmen fought back hard, as they closed out the quarter with 7 straight points.

Aurora continued to push, as they cut the lead to as low as 5 points halfway through the final quarter. However, the Magics regrouped and 15 straight to seal the victory.

Anthony Cook had an all-around effort for the Magics, as he finished with 31 points, 10 rebounds, eight assists and four steals. He made two 3-pointers and 9-of-10 free throws.

The Magics close out the regular season Monday, Feb. 22 at 7 p.m. versus Shaw at home before opening the postseason tournament Wednesday, Feb. 24 at Copley at 7 p.m. 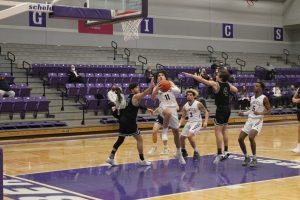 Tony Fox goes up for a reverse layup against Aurora.