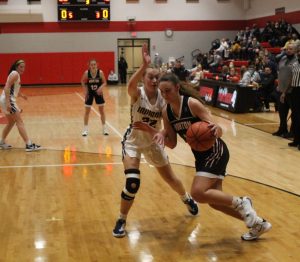 Junior Gabriella Destefano drives to the net in Norton’s 38-36 win against Copley in the district semifinals.

The Panthers led 33-22 early in the fourth before Copley made their comeback, as two 3-pointers fueled an 11-0 run to tie the game at 33 with 2:01 remaining. Norton fought right back with a layup from Kaylee Murawski, and Copley tied the game with 45 seconds remaining.

Norton was able to dribble out most of the clock before point guard Bailey Shutsa attacked the basket and passed it out to Destefano, who made the 3-pointer with just 2.3 seconds remaining. “I was ready to take the shot but I wasn’t quite sure if Bailey was going to pass it to me or not,” said Destefano. “But when she passed it to me I was like ‘Oh this is my time, I can shoot it.’ There was time left and I was ready for it. It was a great play, (Shutsa) attacked and she was either going to get a layup or pass it to me for a shot. Who doesn’t dream about making a shot like that?”

The game wasn’t over as Copley inbounded the ball after a timeout. The ball went to Ashley Kerekis, who was fouled as time expired. However, the officials called an intentional foul on Norton, giving her two free throws and the ball with 0.8 seconds left. Kerekis made one foul shot and Copley didn’t have time to put up a shot on their sideline inbounds pass and the game came to an end.

“Look Copley is quick, they have some nice players,” said Head Coach Brian Miller. “They did what they had to do, kept the game in the 30’s and gave themselves a chance. Our experience, it doesn’t matter in the tournament, we’re going to get everybody’s A-effort. It’s hard to stay on top. I expected Copley to play hard. We were up and let it float away, had some mental errors and kind of panicked. It is what it is, I don’t mind tough games. Gabby hit a big shot at the end, she played well the whole game, it’s probably her best game of the season. She stepped up at the right time, Grace Marino made some 3’s. (Nobody) would think that if Bailey Shutsa would have no points that we’d win the game. But she did other things, (Copley) was not going to let her score, they were chasing her and double-teaming her, but other kids scored.”

Destefano led Norton with 14 points while Murawski had 12 points and nine rebounds. Also scoring were Bailey Acord (6 points, seven rebounds, two blocks) and Marino (6 points). The Panthers held Kerekis to 12 points and five rebounds. “I thought we did a good job on (Kerekis) tonight, I don’t think she really hurt us,” said Miller. “Our goal was to keep her around 10 points, so their star player and our stars kind of balanced out, it was about who else would make plays and our secondary girls outplayed them. We made shots, I’ll give (Copley) credit, that’s going to be a really good team the next couple years.”

It was the first game for Murawski in nearly three weeks, as she injured her hand in a game against Laurel Feb. 5. “It’s not fully healed, but I feel good to play and the doctors said I’m good to play if there’s no pain and I feel good,” said Murawski. “It’s my first game back and I just wanted to come out strong and be there for my team. (Copley) made some 3’s and came back, they’re a good team and they’re young, they’re going to be good in the future. We had some turnovers and today wasn’t our best day, but we came out on top and that’s all that matters.”

“Having Kaylee back certainly made an impact,” said Miller. “Kaylee is a good player and she makes a difference for us. She was exhausted, I think three weeks of sitting did that. The conditioning is always a factor.

Norton improved to 21-3 and will host St. Vincent-St. Mary Saturday, Feb. 27 at 7 p.m. with the district championship on the line. The Irish defeated Revere 38-29 on the road Feb. 24 in the district semifinals. 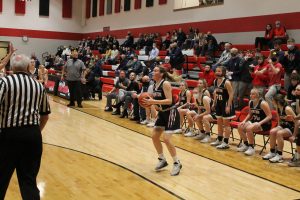 Grace Marino gets set to make a 3-pointer against Copley.