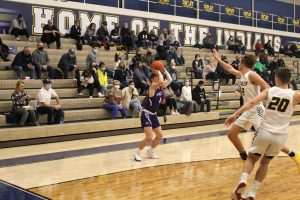 The Magics started off well, as they led for most of the first half and took a 31-24 lead into halftime. The Indians dominated the third quarter, as they outscored Barberton 19-4. The run started with a questionable intentional foul call on Jamair Blackmon, as he was called for a charge, and after a lengthy discussion between the officials they deemed he intentionally hit a Copley defender in the head with his elbow.

Copley made both free throws, and after an Anthony Cook basket, the Indians went on to score 13 straight points. Copley then opened the fourth quarter on a 17-4 run to seal the win. 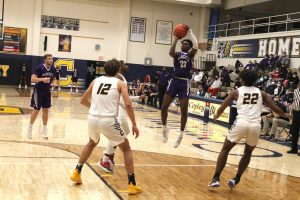 Anthony Cook rises high on a jump shot at Copley.

Barberton struggled to stop 6-foot-7 junior center Caleb Laurich, who finished with a game-high 28 points and 12 rebounds, while Khoi Thurman (15 points) and Amire Robinson (7) followed. “They have a big kid and they really started to go to him,” said Assistant Coach Martel Carpenter. “That’s something we really didn’t see them do the first two times we saw them. We struggled to get into the help side defense. That really became the difference, we thought we made the adjustments to slow them down but it never really happened.”

Seniors Cook, Blackmon, Bundalo and Miller played their final game with the team. “They all bring unique talents to the team,” Carpenter said. “They’re all their own individual person, they all bring different aspects to the locker room. You love talking to them every day, it’s going to be hard next year not seeing those faces at practice. This is the sad part of basketball in that eventually it does end. If they need anything going forward just let us know. I prayed for them countless times so they could have a season, and like they told us multiple times they were just happy to play a couple ballgames.”

Carpenter believes, while a lot will be missed from this senior class, that the future is still bright for Barberton basketball. “We’ve got Chanden Lee and Kaige Lowe and of course Tony Fox, who’s given us a lot the past two years. Glen Parker really came on strong this year, so we’ve got a junior class that’s really strong. And we’ve got some underclassmen that we’re really counting on and a freshmen class that brings a lot of talent to the table. So going forward as a program we’re really positive, we thanked the seniors for setting the tone for what Barberton basketball is going to be for the next couple years.”

The Magics finish the season with a 10-7 record while Copley moves on to play for a sectional title Saturday, Feb. 28 at 7 p.m. at Wooster. 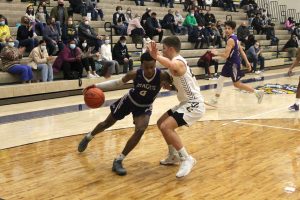 Glen Parker drives to the net in the Magics’ season-ending loss.