Around 6 p.m. that afternoon, officers patrolling the area stopped the first vehicle for an equipment violation in the area of Brown Street and West South Street. During a consent search, officers found a loaded handgun, over 8 grams of Fentanyl and a digital scale near the car’s gear shifter. The driver and only occupant, Brandon Anderson 26, also had a large sum of cash. He was placed under arrest without incident.  Anderson was charged with improper handling of firearms in motor vehicle, carrying concealed weapon, weapons under disability, and possession of drugs/trafficking. Anderson was transported to the Summit County Jail after his arrest.

In the second traffic stop, Malik Robinson, 22, was arrested after officers found a gun in the car. Officers conducted a traffic stop on a vehicle Robinson was driving just after 9:00 p.m. When officers approached the car, Robinson told them there was a gun inside the car. The gun was recovered and secured. After finding that Robinson did not have a gun permit, he was placed under arrest.

Robinson was charged with improper handling of a firearm in motor vehicle and carrying concealed weapon. He was also cited for driving under suspension.

A man wearing a ballistic vest (body armor) was arrested following the third traffic stop. Around 12:45 a.m. Feb. 26, officers observed a vehicle leaving a residence in the 500 block of Lafollette Street and stopped the car for suspicious activity. The home was one of two locations searched earlier this week, where weapons and drugs were recovered. Officers observed the driver of the vehicle run a stop sign at Lafollette and Brown Street and initiated a traffic stop. As officers were approaching the car, the rear passenger, Jonathan Coffield, 27, was seen reaching toward the floor and making suspicious movements. Officers spotted a gun between Coffield’s legs and ordered him out of the car. He was placed under arrest without incident.

During a search, Coffield was found to be wearing a ballistic vest under his hooded sweatshirt. He was also in possession of over 5 grams of Fentanyl, 1.5 grams of Marijuana, and a trace amount of Methamphetamines. The loaded handgun was found to be entered stolen out of Shenandoah County, Va.

Coffield was charged with two counts of possession of drugs, carrying concealed weapon, receiving stolen property, having weapons under disability, improperly handling a firearm in a motor vehicle, possessing a defaced firearm, obstructing official business and possession of drugs/marijuana. He was booked into the Summit County Jail on the listed charges. 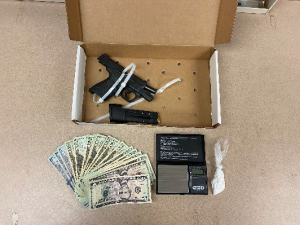 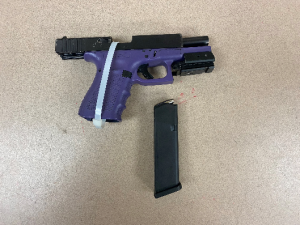 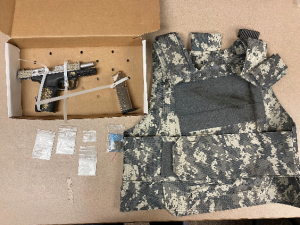