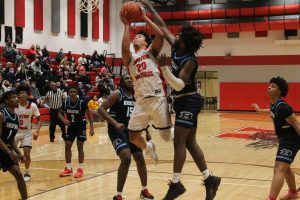 Larry Harper goes up for 2 points against Benedictine.

After receiving a first round bye, Norton’s boys basketball team won their first sectional title since 2016 with a 46-39 win against Cleveland Benedictine in overtime.

The 26th-seeded Bengals, who defeated No. 14 Holy Name in the sectional semifinals, scored the first 7 points of the ballgame. Norton Head Coach B.J. Sanderson called a timeout to calm the team down, as it was evident right away that the fifth-seeded Panthers wouldn’t have an easy win. “They’re big, they have guards who can drive it, they’re just a tough matchup,” said Sanderson. “You have to look at who they played, they lost to Mentor, St. Ignatius, St. Ed’s, they played the biggest teams in Ohio.”

Phillip Wallace broke the run with a 3-pointer, and Norton came back to tie the game at 7 before a Benedictine basket ended the first quarter. The Bengals then came out of the gate strong in the second as well, scoring the first 6 points to force another Norton timeout. Once again the Panthers fought back, as Tommy Reynolds ended the run, and Norton finished on a 9-3 run to trail 18-16 at the half.

Eli Hirst opened the second half with a 3-pointer that gave Norton its first lead of the game, and the teams traded baskets the rest of the way, as Reynolds scored with 2:24 left in regulation to give the team a 35-33 lead.

Benedictine then dribbled around looking for a good shot before Reynolds stole a pass, forcing the Bengals to foul three times to force Norton to shoot free throws. Reynolds missed the first of a 1-and-1, and Benedictine got the rebound, drove down the court and converted the tying layup with 35 seconds remaining. Norton had a chance to win, as they dribbled the clock down before Collin Lucas attempted a 3-pointer from the corner, but it was no good.

Larry Harper made a jumper from the foul line to score first in overtime, but Benedictine answered right back, although it would be the last time they would score. Reynolds would shoot seven foul shots in overtime and he made six, while Wallace made 3-of-6 as Norton held on for the win.

“We’ve been trying to get (a sectional title) for years, it feels good,” said Reynolds. “It was just a mental thing, I kept shooting it too hard (on foul shots), so I had to ease up a touch and keep my followthrough.”

Reynolds led the team with 19 points and 10 rebounds while Wallace had 13 points and six rebounds. Hirst made two 3-pointers and two fouls shots for 8 points to go along with seven rebounds and four steals. Harper (4 points, four rebounds) and Lucas (2 points, six rebounds) also scored. “Eli shot the ball great tonight,” Reynolds said. “That’s what we need. For us to go far in the tournament we need everyone to shoot the ball well.” 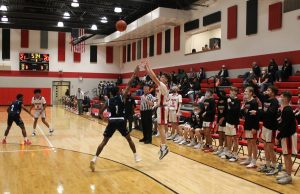 Eli Hirst shoots a 3-pointer from the corner.

“There are stats that don’t necessarily show up on the stat sheet,” said Sanderson. “Yes, rebounds do, but Collin not only got some rebounds but got on some loose balls. Eli too, he rebounded the heck out of it. We know it can’t just be Larry and Phil rebounding, we’ve been stressing that to our guards that they have to rebound better, and they’ve been doing it. It’s no coincidence that we’ve been out rebounding teams and if you’re doing that it’s not one or two guys, it’s a team effort.”

Norton improves to 19-2 and advances to the district semifinals against CVCA, as the No. 13 Royals upset No. 8 Northwest 36-30 in the opening round. The game will tip off at 7 p.m. Thursday, March 4 at Norton High School. “(CVCA) played them twice in the regular season and Northwest beat them twice,” said Sanderson. “They have some size and decent guards, they’re good. You get to this time of the year everyone is going to be good. We’re not taking any team lightly, we respect every team we play, including (Benedictine). They’re a good team, I don’t care what their record is, you can see how good they are. We’ll enjoy this tonight and Monday we’ll get ready for CVCA.” 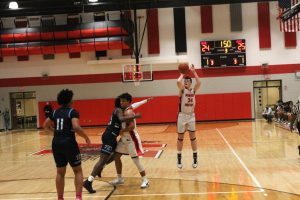