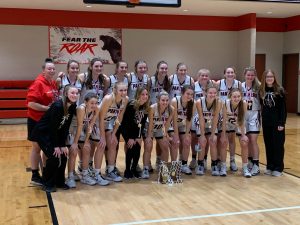 For the second straight season Norton’s girls basketball team will head to regionals after winning a district title, as they defeated St. Vincent-St. Mary 58-47.

“I’m just happy for the girls,” said Head Coach Brian Miller. “To win on our home floor, it’s a special moment they’ll never forget. To do it in front of our fans in a COVID year, with a big crowd against a good opponent. We worked hard for this, nothing was given to us. We’re 22-3 right now with a district title, it’s just a tribute to our great girls on the court and off the court they’re great students and have tremendous character. I’m just fortunate to be the one that gets to coach them.”

The Irish jumped out to a 6-3 lead before senior Sarah Nauer made a 3-pointer to tie, and the Panthers followed with 6 straight points to end the first quarter with a 12-6 lead.

Senior Sarah Nauer cuts down a piece from the net after winning the district title.

Norton made it 14-6 in the second before the Irish ended the run with a free throw. The game then took a huge swing when Gabriella Destefano was called for a foul on a made layup, and the Irish player made the free throw to convert a 3-point play. Things got worse for Norton as Miller was called for a technical foul. St. Vincent-St. Mary made both technical free throws and made a layup on their possession to finish the 7-point possession.

Norton got back to their game from their, as they led 25-19 after two quarters and 42-29 after three. The Panthers then were able to milk a lot of the clock in the fourth while Bailey Shutsa kept putting points on the board from the foul line, and a 3-pointer from Riley Ballinger with 4:25 to play made it 49-34 and ended the Irish’s hopes. 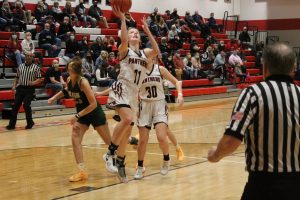 “(St. Vincent-St. Mary has) lots of speed, they’re quick and athletic,” Miller said. “Much like Copley they’re young and are going to be a factor in the coming years. It was a challenge trying to run an offense and get into the teeth of their defense a little bit, but we did what we had to do. We handled the ball overall pretty good, Shutsa and Acord did what we needed them to do and Sarah Nauer did a nice job tonight. Riley Ballinger made some shots, it’s a tribute to those girls and the time and effort they put in. I don’t know many programs that can say they’ve won as many district titles in girls basketball as we have over the past 10 or 12 years, and just getting to the district title game. We’ve won six and I think we’ve lost four or five, so it’s been amazing.”

Shutsa led the team with 15 points and four steals, while she made 13-of-16 free throws, including 6-of-8 in the last 1:38 of the game. “It feels amazing,” Shutsa said after leading the team to their second straight district title. “I’ve been practicing (free throws) a lot, and believe it or not I have not been making them in practice. But I just knew I had to keep my elbow under and as long as I kept my confidence up it would work out.”

Ballinger followed with 12 points, including two 3-pointers made, while Bailey Acord had 10 points and three assists. Kaylee Murawski (9 points, 11 rebounds), Nauer (6 points), Destefano (4 points, six rebounds) and Madison Tatka (2 points, seven rebounds) also scored. “It was awesome, I’ve been in a slump for the past three or four games,” Ballinger said. “In practice I’ve been missing and making some, and one of the 3’s when the other team had to call a timeout that’s how I knew it was just a great feeling. (Coach Miller) always says I have the green light, so if the girls’ hand is down, I’m shooting. He always tells me I have the green light so it’s definitely a confidence booster.” 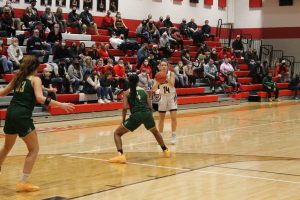 Senior Riley Ballinger eyes the net before making a 3-pointer.

The Panthers improved to 22-3 and moves on to regionals, where they will play Granville Tuesday, March 2 at 8 p.m. The game will be played at Mansfield High School, compared to the short drive to Barberton in last season’s regionals.  “It’ll be a great game,” said Miller. “I look forward to the challenge, it gives us the chance to go somewhere where they don’t know a whole lot about us other than on video. We’re not backing down from anybody. We’re going to go down to Mansfield and play hard and whatever happens, happens. It doesn’t matter, it’s been a great year in a year where nobody thought we’d play. That’s definitely something a newspaper can write about, it’s amazing, these kids are amazing.”

The game will be after the Herald’s weekly deadline, so make sure to check for updates on the Herald’s Facebook page and barbertonherald.com. 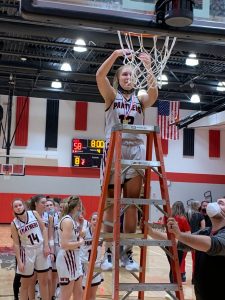 Senior Kaylee Murawski is the first Panther to begin cutting down a piece of the net after winning a district title.