A car stolen on Barberton’s North End Feb. 26 eventually led to the arrest of the suspect in a Green gas station robbery earlier in the week.

The suspected robber, Dylan C. Norman, 23, of Cuyahoga Falls, is charged with theft of a motor vehicle, failure to comply, weapon under disability, improper handling of a firearm in a motor vehicle and an array of traffic violations.

The affair began Feb 26 a little after 3 a.m. A Morgan Street resident was getting ready to go to work and had started the car. While back inside gathering some belongings, the vehicle was stolen out of the driveway.

Officers on patrol spotted the car a short time later around North Summit and Mitchell and tried to pull it over and the driver refused. Police chased the car through Barberton and into New Franklin, where the driver crashed at the intersection of state Route 619 and State Park Drive. The driver got out and fled on foot.

Police found a loaded gun on the driver’s side floor of the car. Talty was a passenger in the car and talked to officers. She gave fake identities for a while before finally admitting her and the driver’s names.

Meanwhile, the driver, finally identified as Norman, stole another car from Powell Avenue in New Franklin. Akron officers found it and chased it after it refused to stop. This car also crashed and Akron officers nabbed him after a foot chase.

Norman is a suspect in a Feb. 24 robbery of a Circle K in Green. He and a Black man police currently know only as “Prince Blood” threatened a clerk there a little before 4:30 a.m. and stole cash from the register, several cartons of cigarettes, some CBD and vaping products. Police say he has other warrants for aggravated robbery, as well. 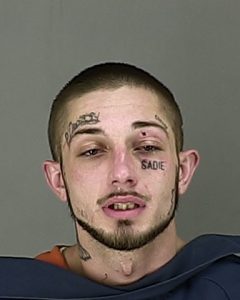