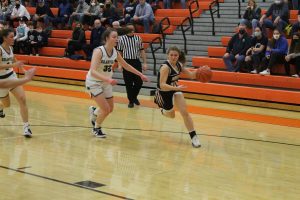 Addie Kropp drives to the net in Norton’s 38-34 win against Granville in the regional semifinals.

Norton’s girls basketball team advanced to the regional finals with a 38-34 win against Granville.

Granville started off strong, as they led 12-5 after one quarter. To make matters worse for Norton, point guard Bailey Shutsa got in foul trouble early, as she picked up her second with 3:42 remaining in the opening frame and her third foul halfway through the second and had to sit for the rest of the half.

The Panthers didn’t fold without her, as bench guards Addie Kropp, Sarah Nauer and Grace Marino kept up the defensive pressure while forwards Kaylee Murawski and Gabriella Destefano brought the offense. Murawski had 8 second quarter points while Destefano had 4 to cut the lead to 3 at halftime.

“This year there’s games where (Kropp) didn’t play at all,” said Head Coach Brian Miller. “Then there’s games I use her. I get on her all the time at practice to handle the ball better, I keep telling her she’s going against the top two guards in Northeast Ohio in practice, and tonight she proved what she’s capable of doing. She’s a strong girl, a little more physical, so this was a perfect game to get her in and play and she did a good job, I’m proud of her.”

Each team played well defensively before Murawski tied the game with a basket before the quarter ended, as the teams remained tied at 24 going into the fourth.

Norton then took its first lead of the game as Destefano made a pair of baskets to open the fourth. Granville came back to tie it with 4:40 left, but Murawski followed with a pair of free throws and Norton wouldn’t give the lead back, as Shutsa (4-for-4), Bailey Acord (2-for-4) and Destefano (2-for-2) each made big foul shots down the stretch to seal the win.

“I feel good for (the players), for me it’s just a privilege to coach them,” said Miller. “There were a lot of contributors tonight, unsung heroes like Addie Kropp, Madison Tatka, Sarah Nauer, those girls fought and gave everything they had, didn’t really worry about scoring. They do the little things, Bailey Shutsa gets in foul trouble, and we persevered and survived. You lose a great player but other kids stepped up. Kaylee tonight did a great job and Gabby. Bailey Acord struggled a little tonight with turnovers but we want her out there at the end because we know she can make plays. We have to come back Friday night and do it all over again. We’ll see what happens.”

The Panthers improved to 23-3 while Granville fell to 25-2. Norton advances to the Elite 8, where they will play Napoleon Friday, March 5 at 7:30 p.m. at Mansfield High School. “I’m proud of all the players, it’s a great win, it’s a great win for the school and community and them,” said Miller. “That’s the No. 3-ranked team in the state, and now we have to go play the No. 1 team. So everybody has been writing us off all year, that we’re not very good, but we just keep winning. So just keep denying it, I don’t care. We did what we had to do. The defense in tournament time is what’s going to win games, and our defensive effort was outstanding, we really clamped down in the second half. (Granville) is a great 3-point shooting team, and they didn’t make one tonight. So they followed the game plan and did what we needed to do and we got the win, I don’t care if it’s 9-8, as long as we win.”

“(Napoleon) is a great program, last year they made the Final 4, they have good players. There’s no easy games, you reach this point everyone is great. We’re going to have to go out and play this hard again, and we’re capable of doing it. We look forward to the challenge of playing the top team in the state.” 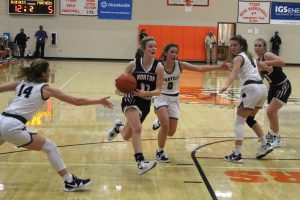 Bailey Acord goes in for 2 points as Norton advances to the regional finals.