It was time again for the annual Osman C. Hooper Awards, when the Ohio News Media Association recognizes excellence in nondaily newspapers and The Barberton Herald did well.

The award ceremony was very different this year. The awards typically are part of the larger Ohio News Media Association convention in Columbus and is fit in with a day of seminars and workshops where local journalists can hone their craft. The pandemic put the brakes on that this year.

Instead, award recipients gathered on Zoom, where the presenters said more than once they hoped this would be the only virtual version of the ceremony they would every have. On checking in, they were all given a link to a video that announced the winners.

The Herald competes in Division A, the largest, and brought home five awards.

For In-Depth Reporting, The Herald’s three-part “A Matter of Black and White” series, by Bob Morehead, took third place.

“Heartening to see a small community join the national conversation about race in America – with their community news source facilitating the discussion,” the judges said.

“An amazing opportunity to follow up with a family (20) years later is illustrated with clear writing and solid quotes,” the judges said.

The Herald’s fifth prize was a second-place finish for “Women Mean Business” in the Special Edition or Section category.

“I loved the bright colors and fun design,” the judges said. “I really like the idea behind this publication.”

The Women Mean Business magazine, started in 2005, is one of the Herald’s most popular sections ever. It features bios of the working women of the Summit County area. The paper gets more feedback on this publication than any other. The 2021 edition will be coming out in May. Call 330-753-1068 to find out how you can get in! 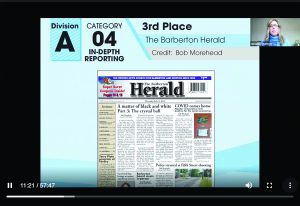 The Herald’s “A Matter of Black and White” took Third Place in the In-Depth Reporting category. 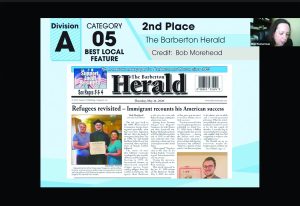 The Herald’s “Refugees Revisited,” an opportunity to follow up on a story written 20 years ago, took Second Place in the Local Feature category. 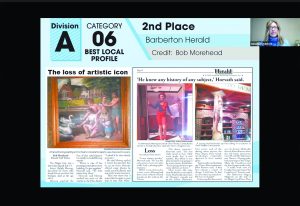 The judges thought The Herald’s retrospective on local artist Ralph Hertzog was worth a Second Place prize. 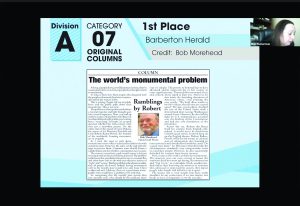 Bob Morehead’s “Ramblings by Robert” was judged the best original column in the division this year. 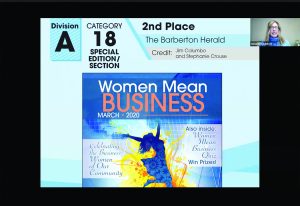