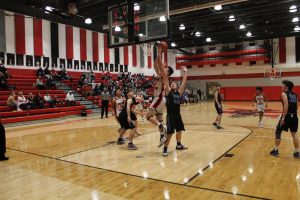 Phillip Wallace scores from below the basket in Norton’s 75-47 win against CVCA.

After leading by 5 at halftime, Norton’s boys basketball team dominated the third quarter to cruise to a 75-47 victory in the district semifinals versus CVCA.

With the team up 35-30, Eli Hirst made back-to-back 3-pointers to give the team their biggest lead of the night. Norton continued with a layup and 3-pointer from Phillip Wallace and a basket from Larry Harper to cap a 13-0 run. CVCA called a timeout and scored their first 2 points of the half but the Panthers kept dominating, as they led 58-36 after three quarters as they outscored CVCA 23-6 in the third.

“Eli is one of those energy guys, and when he gets going you can see what it does,” said Head Coach B.J. Sanderson. “He gets everyone else going. We ran some stuff for him coming out of halftime, and he did a great job of stepping up and making big shots.” 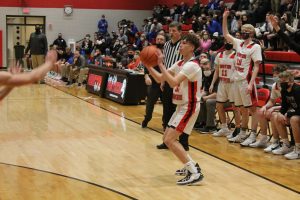 Senior point guard Tommy Reynolds was phenomenal in the win, as he had a team-high 25 points to go along with 10 assists, nine rebounds, six steals and four 3-pointers. “If you have to come out and guard Tommy I don’t know how you stop him,” said Sanderson after Reynolds’ hot shooting night. “They tried putting two or three guys on him in the second half and that didn’t work. It’s one of those things where Tommy is such a great player, he can do anything with the ball, he can score it, but he did a great job in the second half of finding our shooters. So if they’re going to double or triple team him he’ll find our shooters, and they’re playing with confidence right now heading into the district finals.”

Buchtel is led by junior Chris Livingston. The 6-foot-6 forward is the top-ranked player in Ohio and the No. 6 ranked player in the nation for players set to graduate in 2022. “He’s good, what else can you say,” said Sanderson. “It’s not just him, they have (No. 17-ranked of 2021 graduates in Ohio Travonne Jackson). They have two really good players, and they have some good role guys around them too. They’re a good team, we know we’ll have to play our A-plus game when we go over there to beat them.”

“But with that being said, our kids are playing with a lot of confidence right now, our kids love each other and care about each other. When you have that you never know, we’ll let the cards fall where they may. We haven’t watched film yet, but we’re going to do the best we can to prepare our kids and get ready to play. This is something we’ve talked about since the summer, we have everyone healthy, knock on wood, for the first time in three years. We’re going to go, and I’m just happy to go out and compete with these guys as long as we can because I love them.”

With a win the Panthers will secure their first district title since the 1950’s. The game will tip off at 7 p.m. Saturday, March 6 at Buchtel High School. 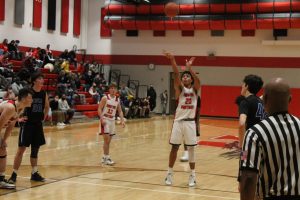