It’s been about two years since Maddie Indré took her guitar and her lyrics out into the local cafes and coffee houses and, with her new video “The Stream,” she’s heading in a new direction.
With an electric ’90s vibe reminiscent of The Cranberries, the 22-year-old has brought a full band with her for this one.
“It’s the first single off our new album that’s coming out this fall,” Indré said.
She’s recruited her keyboardist brother, Angelo, and a few of their friends and named the band Indré. She declined to release the name of the new album, wanting it to be a surprise for closer to release.
For “The Stream,” the band took over Yoga Bliss in Fairlawn, the yoga studio where Maddie teaches, and recruited some of the yogis to participate.
“It was cool to combine yoga and music,” she said. “Maybe it’ll make more people try yoga.”
Instead of shooting multiple takes at multiple locations and editing it together, the video for “The Stream” was shot in one take with planned segues and hasty costume changes off-camera.
She describes “The Stream” as an effort to celebrate self-love and making people feel stronger.
Indré continues to play shows in the local music scene, with a show coming up July 16 at the B-Side Liquor Lounge in Cleveland, and more new material is coming as the album drop date approaches.
“There will definitely be more video content and more singles,” Maddie said. 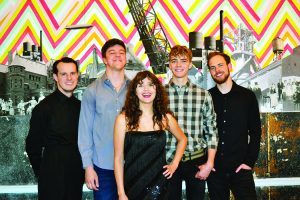